Today we will look at Thanos, a open source, highly available prometheus setup with long term storage capabilites, that we will run on docker to simplify the setup.

Note that running this proof of concept does not make it highly available as we will run everything on one host, but it will give you a feel what Thanos is about. In a future post, I will setup Thanos in a multi node environment.

If you are not familiar with Prometheus, then have a look at their documentation, but in short, prometheus is a open source monitoring system and time series database developed by soundcloud.

Prometheus is a monitoring system includes a rich, multidimensional data model, a concise and powerful query language called PromQL, an efficient embedded timeseries database, and over 150 integrations with third-party systems.

Thanos allows you to ship your data to S3/Minio for long storage capabilites, so you could for example only store your “live” data on prometheus for 2 weeks, then everything older than that gets sent to object storage such as amazon s3 or minio. This helps your prometheus instance not to be flooded with data or prevents you from running out of storage space. The nice thing is, when you query for data older than 2 weeks, it will fetch the data from object storage.

Thanos has a global query view, which essentially means you can query your prometheus metrics from one endpoint backed by multiple prometheus servers or cluster.

You can still use the same tools such as Grafana as it utilizes the same Prometheus Query API.

Thanos provides downsampling and compaction, so that you downsample your historical data for massive query speedup when querying large time ranges.

Thanos is a clustered system of components which can be categorized as follows:

The information from above was retrieved from their website, feel free to check them out if you want to read more on the concepts of thanos.

What are we doing today

We will setup a Thanos Cluster with Minio, Node-Exporter, Grafana on Docker. Our Thanos setup will consist of 3 prometheus containers, each one running with a sidecar container, a store container, 2 query containers, then we have the remotewrite and receive containers which node-exporter will use to ship its metrics to.

Below is the docker-compose.yml and the script to generate the configs for thanos:

Once you have saved the compose as docker-compose.yml and the script as configs.sh you can create the configs:

The script from above creates the data directory and place all the configs that thanos will use in there. Next deploy the thanos cluster:

Access the Query UI, which looks identical to the Prometheus UI: - http://localhost:10904/graph

And under the thanos bucket you will see the objects being persisted: 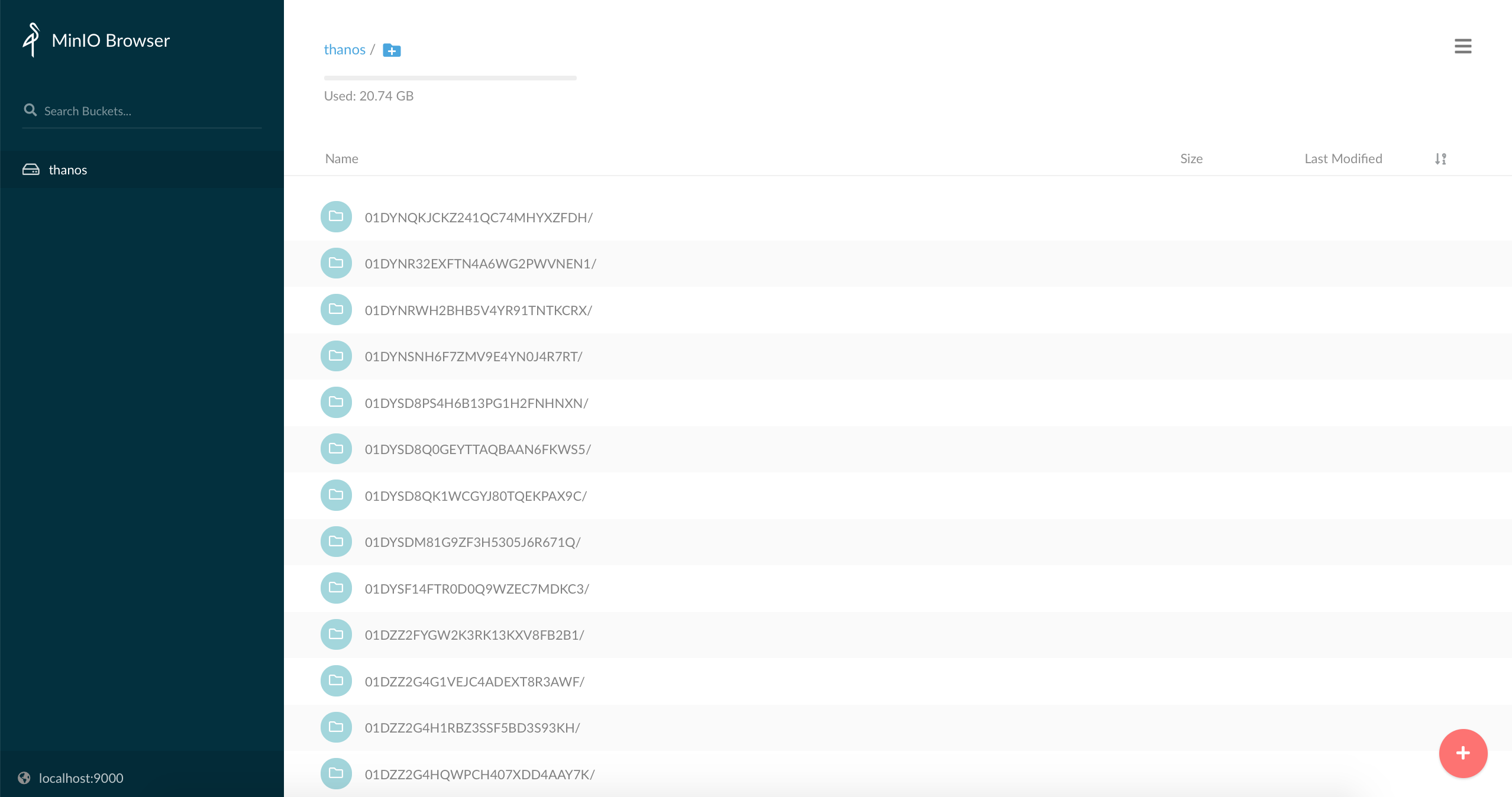 Select datasources, add a prometheus datasource and select the endpoint: http://query0:10904, which should look like this:

When we create a dashboard, you can test a query with thanos_sidecar_prometheus_up and it should look something like this: