Prometheus is one of those awesome open source monitoring services that I simply cannot live without. Prometheus is a Time Series Database that collects metrics from services using it’s exporters functionality. Prometheus has its own query language called PromQL and makes graphing epic visualiztions with services such as Grafana a breeze.

What are we doing today

We will install the prometheus service and set up node_exporter to consume node related metrics such as cpu, memory, io etc that will be scraped by the exporter configuration on prometheus, which then gets pushed into prometheus’s time series database. Which can then be used by services such as Grafana to visualize the data.

Other exporters is also available, such as: haproxy_exporter, blackbox_exporter etc, then you also get pushgateway which is used to push data to, and then your exporter configuration scrapes the data from the pushgateway endpoint. In a later tutorial, we will set up push gateway as well.

Next, update your system:

Let’s install prometheus, head over to https://prometheus.io/download/ and get the latest version of prometheus:

We need to tell prometheus to scrape itself in order to get prometheus performance data, edit the prometheus configuration:

Apply permissions to the configured file:

Next, we need to define a systemd unit file so we can control the daemon using systemd:

Since we created a new systemd unit file, we need to reload the systemd daemon, then start the service:

Let’s look at the status to see if everything works as expected:

Now since we have prometheus up and running, we can start adding exporters to publish data into our prometheus time series database. As mentioned before, with node exporter, we will allow prometheus to scrape the node exporter endpoint to consume metrics about the node:

You will find the latest version from their website, which I have added at the top of this post.

Look at the status:

If everything looks good, enable the service on boot:

I’m providing the full config, but the config is the last section, where you can see the jobname is node_exporter:

Once the config is saved, restart prometheus and have a look at the status if everything is going as expected:

Let’s add a layer of security and front our setup with a nginx reverse proxy, so that we don’t have to access prometheus on high ports and we have the option to enable basic http authentication. Install nginx:

Create the nginx site configuration, this will tel nginx to route connections on port 80, to reverse proxy to localhost, port 9090, if authenticated:

And this is the config:

Once you have authenticated, head over to status, here you will see status info such as your targets, this wil be the endpoints that prometheus is scraping:

From the main screen, let’s dive into some queries using PromQL. Also see my Prometheus Cheatsheet.

For the first query, we want to see the available memory of this node in bytes (node_memory_MemAvailable_bytes):

Now since the value is in bytes, let’s convert the value to MB, (node_memory_MemAvailable_bytes/1024/1024)

Let’s say we want to see the average memory available in 5 minute buckets: 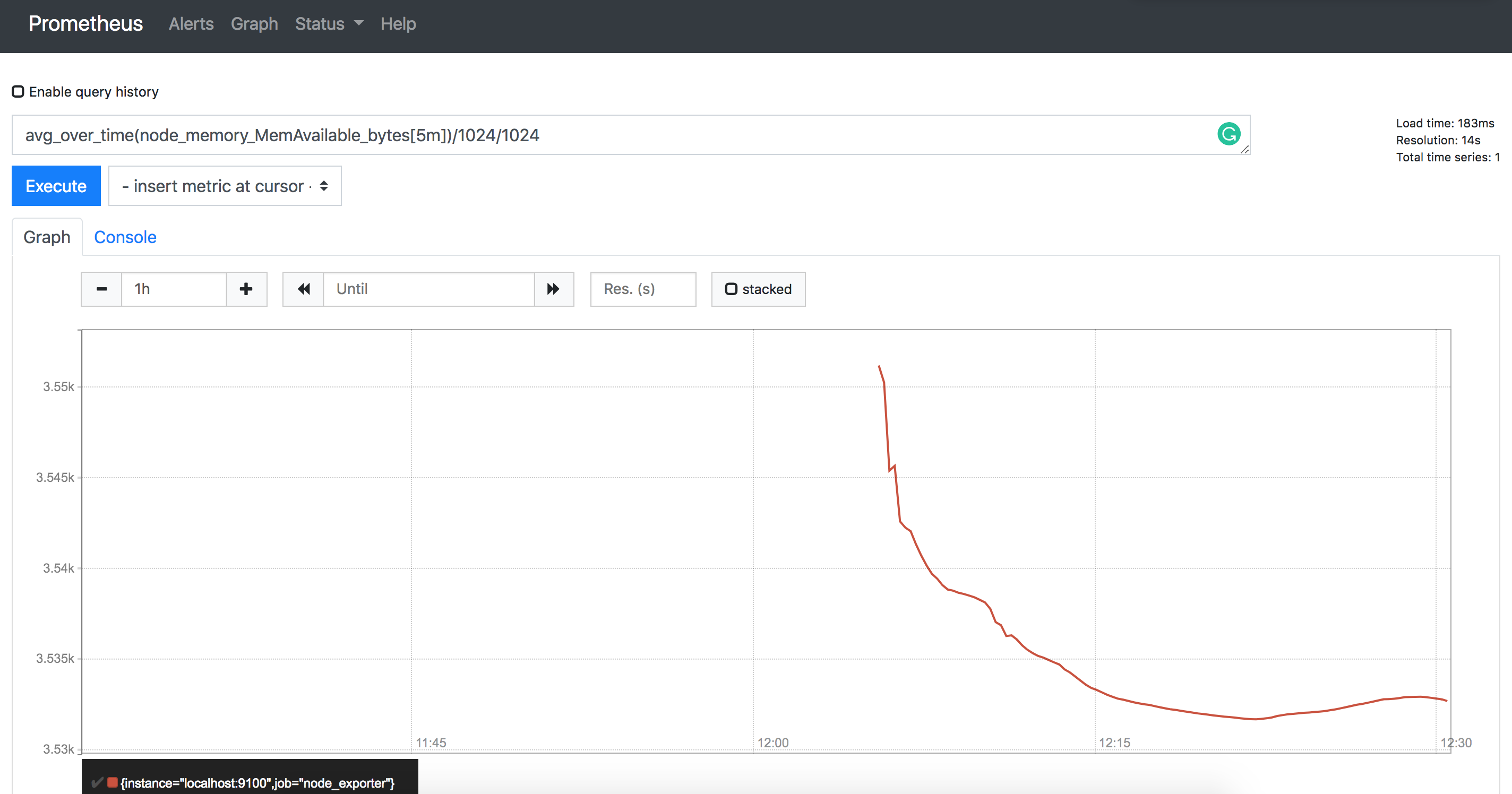 That’s a few basic ones, but feel free to checkout my Prometheus Cheatsheet for other examples. I update them as I find more queries.

Hope this was informative. I am planning to publish a post on visualizing prometheus data with Grafana (which is EPIC!) and installing Pushgateway for custom integrations.